Vanity Fair has the first look at Bradley’s upcoming project titled “Nightmare Alley”. The movie is set to release in December 2021. Check out the first look photos then head to the VF website to read the full feature. 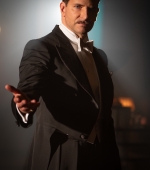 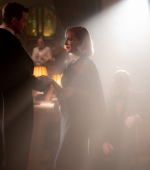 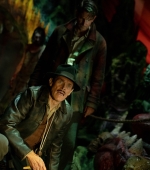 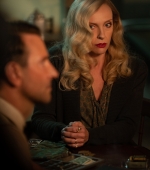 Deception is at the core of Guillermo del Toro’s new thriller Nightmare Alley, but the Oscar-winning filmmaker actually wants to be completely honest with audiences: This movie is not what you might think it is. The ominous title, combined with the del Toro’s long history of bringing ghosts, ghouls, and twisted creatures to the screen in films from Cronos to The Shape of Water, may lead to the mistaken assumption that it’s another otherworldly tale. Nightmare Alley is actually his take on classic film noir, marking a stark shift for the filmmaker. But he knows the false impression might stick.

“That is a distinct possibility,” del Toro tells Vanity Fair. “It has happened to me in the past with Crimson Peak, where people went in expecting a horror movie. I knew it was a gothic romance but it was very difficult to put that across. But yes, this has no supernatural element. It’s based completely in a reality world. There is nothing fantastic. It’s a very different movie from my usual, but yes, the title and my name would create that [impression].”

There are still monsters in this film, out December 17, but these are all human beings: glamorous, elegant, and more alluring than off-putting. Maybe that makes them even more dangerous. Bradley Cooper stars as Stanton Carlisle, a former carnival worker who becomes a big-city star as a nightclub performer, using cold-reading tricks he picked up in the sideshow to create the impression he is a powerful mind reader. Now the marks and rubes he targets are millionaires. Cate Blanchett plays Dr. Lilith Ritter, a psychiatrist who first tries to expose him as a charlatan, then becomes embroiled in his schemes.

“The carnival is almost like a microcosm of the world,” del Toro says. “Everybody’s there to swindle everybody. But at the same time in the carnival, the [workers] know they need each other. In the city, much less so.”

Nightmare Alley is based on a 1946 novel by William Lindsay Gresham, made previously into a gritty 1947 film starring Tyrone Power. Del Toro says his screenplay with Kim Morgan is drawn from the page rather than the screen, which required heavy reworking. “From the beginning, our interest was to go for the novel, but it’s almost impossible to adapt because it has a very kaleidoscopic, very peculiar voice. You would need a six-hour miniseries and shifting points of view, and this and that,” del Toro says. “We started from the novel, and didn’t want to do a remake as much as a new adaptation.” [more at source]